FUTURE MARTIANS | You are my Sunshine

FUTURE MARTIANS has received the following awards and nominations. Way to go!

Helios helps people understand the amount of energy generated from different types of Solar panels and how they can relate it to daily household items.Helios also helps the Hi-Seas crew to plan their daily activities by giving personalized recommendations. 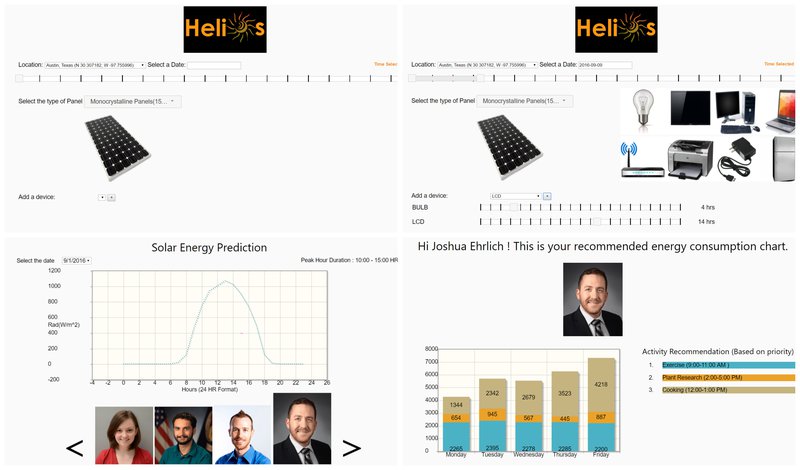 In the past decade we have seen a great inclination towards use of solar energy around the globe. Whereas companies like VerengoSolar, SolarCity are aiming to bring a clean solution to the environment in the very next years, a major population of the world still can't relate how much energy comes from the solar devices like a Solar Panel. When we think of missions like Mars exploration in the future where energy supply becomes heavily reliant on solar energy, it becomes a matter of concern to plan its future availability due to fluctuations in factors affecting solar radiation over time.

The Idea - Our Brainstorming

Firstly there are not many resources available online to understand about solar consumption and questions like "Whether I can use my electric kettle" or "Can I play X-box while having my AC on for next 4 hours" while having solar panels installed is a common question that comes to mind of an end user. Also resources available talk all about numbers like KWh (Kilo Watt hours) , angle of inclination of sun from solar panel but no one connects to the end user answering all the questions above about his/ her daily usage of household appliances.

Helios is the tool provided by our team to address the following solutions:

The data sets (provided by NASA) were meteorological data from the HI-SEAS weather station from four months (September through December 2016) between Mission IV and Mission V. For each data set, the fields included features like radiation, humidity, temperature, wind speed etc.

After performing feature engineering we did aggregation of various parameters provided, into the following data set: Data was broken down into train and test sets. Taking Y (output) as radiation and X (input) as a number of features like humidity, radiation etc we tried doing linear regression and building a model. Trying some features relationship with radiation it was found that temperature had a quadratic relationship with radiation. Hence further feature engineering was done and model was created in R. The following figure shows the R-squared value for our model.

Lastly testing was done on the test data set and realized that root mean square error came out to be a very small value supporting the regression model. Another regression technique we used is SVR (support vector regression) but generally it works better when we have huge data points. Since the data is limited to four months we went with Linear regression as the model. When harnessing energy from solar panels in the future will be a very common thing Helios can easily be implemented to household techniques to make better planning about solar usage and a better life. Here is a glimpse of future of Helios: