Mars: Survive! | You are my Sunshine

Mars: Survive! has received the following awards and nominations. Way to go!

A game/app to challenge while teaching solar budgets 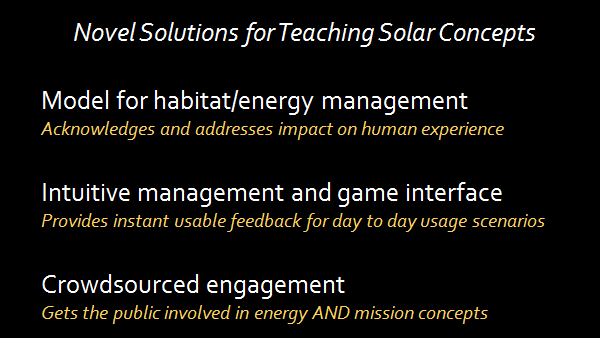 The Mars: SURVIVE! concept is based on “next generation” habitat energy optimization requirements.

We propose a model for habitat energy management that incorporates parameters such as scientific value and crew well-being through a management process tool via a novel intuitive graphical interface, in game and app form.

Our team was able to conceive of and test the data requirements, usage scenarios, mock-up of our game/app, and build a prototype of the “Minihab” hardware for Mars: SURVIVE!

We formed as a team just 24 hours prior to the challenge weekend, so quickly in fact that we never formed a team name, and therefore bear the same name as our idea. (Sorry about that!)

Part of our team began with the idea of a game/app hybrid and a drag and drop interface, while the original team organizer began with the idea of a solar powered data collecting electronic device; both concepts were conceived to simulate the conditions of solar power collection and usage required for a mars habitat. Our inspiration was the shared goal: to connect the public to the rigors of solar energy optimization under the conditions faced by a mars habitat while simultaneously educating them in real world terrestrial applications of solar energy. Ultimately, we all imagined that the public will be able to stay in touch with the first human mars mission.

Running with the idea that the competitive element of a game would create intrigue, the notion of Tetris like shapes representing appliances, devices and systems as load over time, and their placement under curves representing projected, available stored, as well as goal optimized energy took center stage. Furthermore, the shapes would be assigned numbers corresponding to the importance of the corresponding device, appliance or system based on parameters such as non optional survival requirements, crew health, quality of life and scientific value.

We utilized an independent site http://blog.oliverparson.co.uk/2011/01/appliance-survey-tumble-dryer-washing.html providing appliance load data as well as the Space Apps challenge provided link http://pvwatts.nrel.gov/ ;using location coordinates for HI-SEAS, we used nrel.gov to estimate solar production. We used the appliance data to create the Tetris shapes as seen in the mock-up, and the HI-SEAS data was used to create the solar bell curves.

The mock-up was built using http://envisionapp.com/

Much credit goes to team member Matthew Zamora for his work conceiving of, “shapifying” the data for and bringing it all together into mock-up form for the drag and drop interface.


The hardware device. aka “Minihab” was built by team founder Andrew Reed. It employs indoor/outdoor amorphous silicon solar cells, a Texas Instruments solar energy harvester, a super capacitor for energy storage, various environmental sensors which measure temperature, air pressure, light intensity, and voltage/current, all managed by an Arduino microcontroller. A wifi/bluetooth wireless radio will be incorporated to enable data syncing to the cloud.