NBK | You are my Sunshine

NBK has received the following awards and nominations. Way to go!

NBK Solar Energy is an innovative mobile floating platform equipped with mirrors and solar panel cooling system which provides more energy output and saves place on the ground. That energy can be purchased by the Mobile App and used in charging ports. 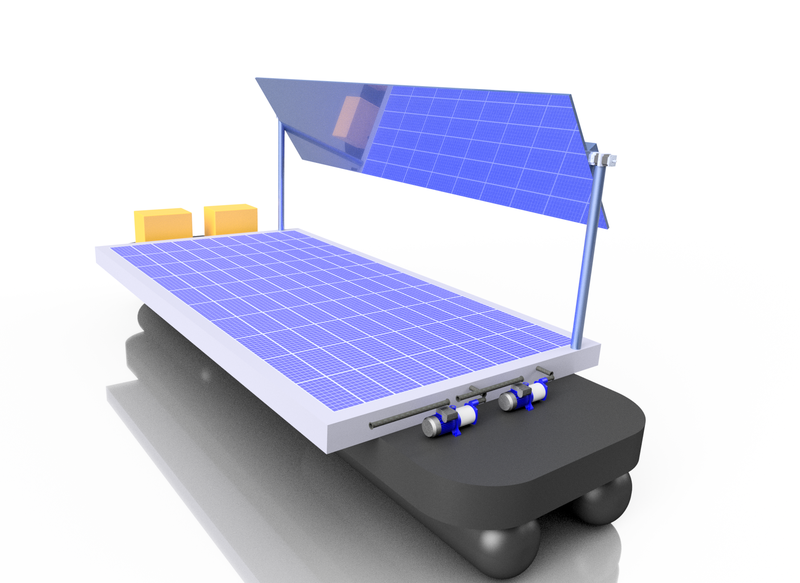 We want to do the challenge and bring people closer to understand the energy of photovoltaic cells. Then we decided to go one step further and give them these energy. And so this innovative idea was born which we presented below.

NBK Energy System is a project of a floating solar panels barge, interactive mini chargers which can be used to charge electrical devices and a dedicated app.

Solar Energy consumption is constantly increasing in everyday life thanks to the use of photoelectric effects. Compared to, for instance, coal power plants which annually donate millions of tons of CO2, thus damaging the environment, solar power is one of the most ecological sources of energy.

From the greenhouse gases emitted by us, CO2, CH4 and N2O contribute most to climate change.

As illustrated by the above figure CO2 emissions trend is growing and is unlikely to stop in the coming years. Measured by NOAA at the Mauna Loa Observatory, CO2 concentrations in 2016 increased by 3 molecules per million air molecules (ppm), similar to a year earlier. These are record growth, unprecedented in 59-year history of measurements. This is the fifth year in a row, when CO2 levels increase by more than 2 ppm.

The diagram below shows the concentration of carbon dioxide in the atmosphere over the last 800,000 years and 70 years.

Not only carbon dioxide is alarmingly high, below is the concentration of methane in the atmosphere over the last 800,000 years and 70 years.

The above illustrations illustrate the scale of the problem and shows that renewable energy sources such as solar power plants are not widely distributed. Unfortunately, the current solar power plants have several shortcomings, the most important of which are:

NBK Energy System aims at solving the above problems.

Firstly, by floating barges equipped with a set of innovative solar panels accompanied by mirrors. In this project water is used as a coolant for improved performance of the panels. Mirror, on the other hand, has the task of directing the sun's rays to the panel and providing the best possible performance. The barge on which the panels are going to be placed is also intended to be equipped with engines that will allow to change the position of the vessel depending on the position of the sun. The plan is to create a sun tracking program to automate the positioning system of the barge. All this is aimed at improving the performance of solar panels.

The prototype layout is shown in the picture below.

The diagram below shows the output voltage of a prototype solar panel system with a mirror.

Fig. 3 the output voltage of a prototype solar panel system with a mirror

Secondly, as NBK Energy System has the improvement of living conditions on Earth at heart the transfer of solar power plants from land to water, which occupies more than 3 times the size of Earth, will allow for better land management.

Another important advantage of this solution is the ease and low transportation costs of a solar power plant. At any time it is possible to change the placement of the panels. This solution can be used in areas where there are large numbers of small islands that provide cheap and ecological energy.

It is generally acknowledged that the geometric growth of the population is not conducive to the emergence of new objects occupying a lot of space.

Thirdly, the project also is meant to disseminate and promote the knowledge about green energy among ordinary people and to facilitate the access to its sources. This is why a mobile app that will allow to purchase energy created by the barges has been developed. Once logged in to the application, there is a possibility to calculate the output power of the panel depending on where it is located, using satellite data. The NBK Energy System will also include posess solar powered mini-chargers where the purchased energy can be used. Mini-chargers are going to be located in parks, beaches or other public places so that people have access to electricity at all times/ whenever they need it. The larger charter project is ultimately intended to be used to charge electric cars, which can help to reduce CO2 emissions to some extent. The app can also locate mini-chargers nearby where a phone or a computer can be charged. Additionally, the app provides the user with the daily dose of solar power information that will surely be encouraging in respect of both the app and mini-chargers. The application is intended to inform users about local mobile loading points and also to enable them to check the quality of individual panels thanks to data obtained from mini-chargers and sent to the server. Thanks to the user map, you will be able not only to find the nearest charging point and directions but also assess the quality and performance of the individual cells on the mini-charger. The application also reports monthly solar radiation/sunlight based on the data obtained from satellites. Thanks to the NBK App the users can also use a calculator that calculates the power delivered from the panels depending on the country of origin where the are.

Fig. 5 Screenshot of our app