Space Chimps has received the following awards and nominations. Way to go!

The Challenge | Dictionary of Earth

Develop a creative way for the public and scientists alike to learn the definitions of Earth-related scientific and technical terms, using the power of crowdsourcing. 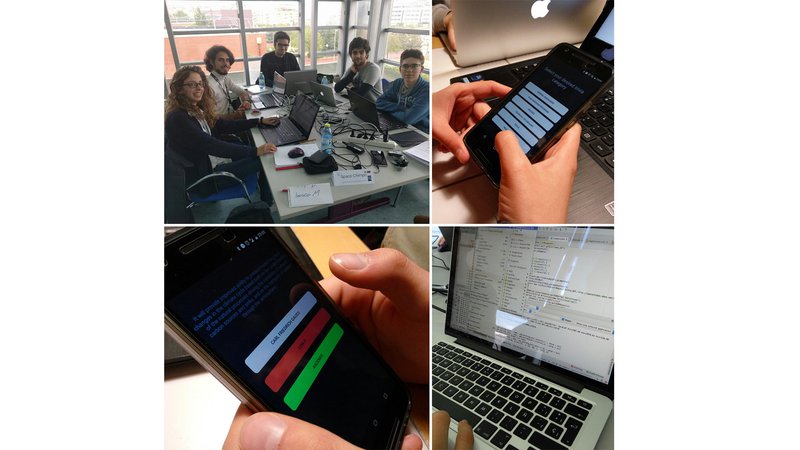 We saw this as a challenge with lots of potential to be creative and innovate on a (potentially) useful app to learn and provide people interested in space with a game to play in spare time.

We divided in three different tasks: Android app development, database management and UI designing. Since none of us had ever participated in a hackathon or a similar event, we had to work out our abilities' speed and coordinate ourselves.

Nearly our only resources of theory were: "The principles of beautiful web design" by Jason Beaird and "Libro 100% Android" by Jarroba.com

Our logo is a modified version of the logo from Space Apps Albacete 2017 using our color palette and the simple images used in some buttons were designed by ourselves.

We also used the following resources from NASA for building our database of scientific concepts,

SpaceDictionary was born after two days of hard (and intensive) work. It features:

We took care of every piece of detail since we designed our own Rest API, built a database using MySQL on a Raspberry Pi so our software doesn't rely on proprietary or out of our hands software and hardware.

We also used our design knowledge to create a simple, responsive and intuitive User Interface following basic design principles like the thirds rule, golden ratio and some Fibonacci numbers hidden in the ratio of buttons and images.

Our github for getting our source code is:

Thanks in advance for your attention. Hope this script is useful.

Made with ❤️ in Albacete, Spain