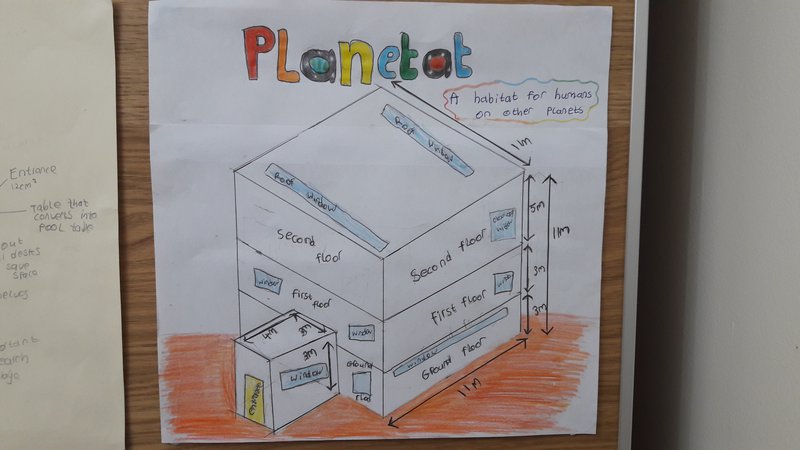 Planetat is a habitat for humans on other plannets. It is small in size so its easy to transport to other plannets but its very space efficient.

At first it was going to be a dome shape but there were a few challenges in layout and size so it is now a cube shape which makes it easier to organise the inside and layout the rooms. Its also easier to build than a dome, can be flat packed and takes up less spce when packed. This simple design also allows it to be easily mass produced. It is 11×11×11 metres and you can fit loads of facilities inside. The base area is 121 square metres and there is a small entrance at the side.

On the ground floor there is a kitchen, bathroom, shower area, storage/work areas, drawers, fold out tables, a research room, extra storage and a social area. The first floor is 3 metres high.

On the second floor there is a centre balcony that is open to the bottom floor. It too was originally going to be circle but it was changed to a square to have a better use of space. This was put in to leave planetat more open spaced and sociable. It was inspired by the current hi-seas dome and how the top floor is open to the bottom.There are also six bedrooms that are all the same size. The bedroom size was another reason to change the shape from a dome to a square as it was hard to get the rooms the same size in a dome. There is a very small living space, more use of storage and a tiny spare room. There is also a second bathroom on the first floor. The second floor is also 3 metres high.

The third floor is just extra space as the building is a cube the other two floors would be really high without a third floor. The floor has a sports area/gym which has loads of space saving furniture to allow lots of different sports to be done, an observatory to observe the night sky from the other plannets,a third bathroom that is slightly larger than the others, an eclosed balcony so people can go there for relaxation and the excess area can be used for storage of extra food, spacesuits ect... .

The entrance is 3×3×4 metres and has a window. There are also small windows on the roof that allow extra light as well as small windows throughout the habitat.

Most of the equitment would be made with lightweight material so that its easy to get it into space. Depending on the plannet the building would be made from different resistant materials so that it could protect the people living there.

Planetat would help develop further space research and if it was a success it would allow humans to travel,live and learn about life on other planets and in space.