All in one transformer furnitures, to save space and payload. 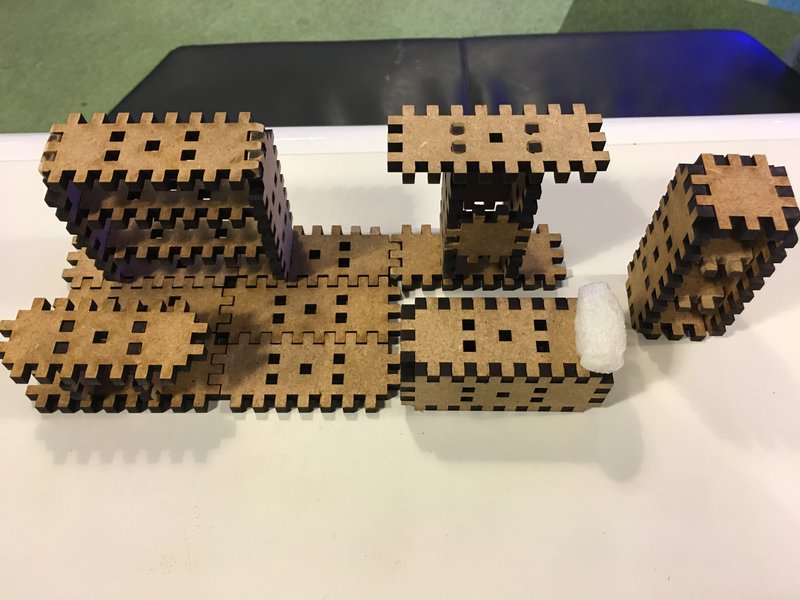 Me (Entrepreneur) and my friend Kevin (software engineer) designed a "space-efficient, lightweight-but-sturdy, energy-saving, and multi-purpose" Lego inspired blocks system that could transform into any furniture when needed.

There's only 4 different pieces that will be mass produced, the unneeded pieces could serve as a floor or wall, then transformed into any needed furniture on the go, since it's made of recycled plastics, it's both light weight and easy to manipulate.

We initially wanted to fully automate the blocks so they could transform into whatever shape needed on command, but considering it cost $45 000/kilos to send supplies to Mars, we thought it would be a bad idea to put motors and gears inside every block, it would make them too heavy and not cost efficient for a Mars mission.

However, one feature was saved from the hammer, and it's the detachable autonomous legs, because our project is heavily inspired by the robot TARS from Interstellar we decided to keep this function to stay true to our initial concept. Why did we choose TARS specifically, but not one of the hundreds of other robots you might ask, well it's because unlike the Skynet Terminators or HAL or Cylons and countless others, TARS breaks the cold and evil robot stereotype and felt more human than the crew, we loved the scene where TARS risked his "life" to save Dr. Amelia Brand from a horrible death, and we really wanted our invention to provide a similar "I got your back" feeling to the astronauts going to Mars.

The idea is to send no more than one or two detachable autonomous legs, so it wouldn't take much space and payload, then once the ship land on Mars, the crew will assemble a bug-out cabinet using our Infinity Cubes system, attach the legs then put inside emergency rations, first aid kits, oxygenator, Mars suits and a solar powered heater. Whenever a CME or Magnetar burst is expected to hit Mars, the crew could just get up and relocate into a lava tube to shield themselves from the deadly radiations without taking anything with them, the autonomous legs attached underneath the bug-out cabinet assembled will respond to the Yellow alert and enter autopilot mode (autopilot software will kindly be provided by Tesla ... maybe), everything the crew need are inside the bug-out cabinet and it will arrive shortly after the astronauts reach the designated lava tube hideout.

Mission update: My team lost the hackathon but we were really excited to use a 3D printer and a Laser cutter for the first time, thanks for everyone who helped us and we will be back stronger next year. I will work harder so I could one day be worthy of Elon senpai's attention.