Space Settlers has received the following awards and nominations. Way to go!

A novel method of building using modular blocks made from local materials for Earth and Mars (Watch Video on youtube.com) 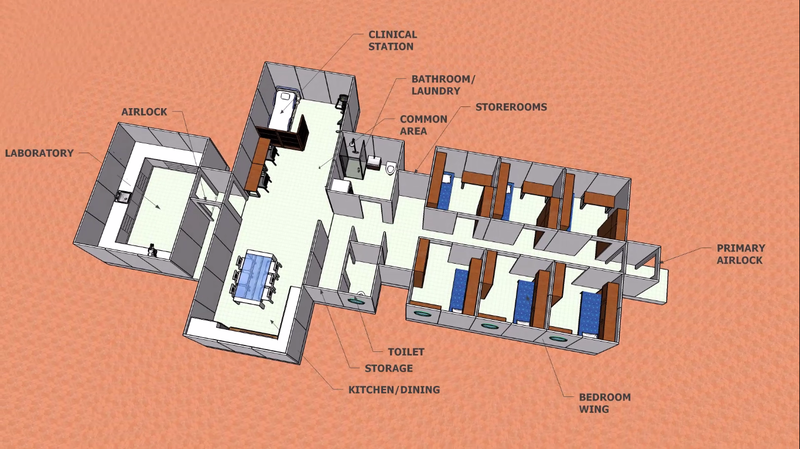 We took on the challenge "Small spaces, big ideas". Rather than simply redesign the layout of the current HI-SEAS research habitat, we developed a technique for forming re-arrangeable and reusable modular blocks that could be used for building a new research habitat on Earth

Which is also adaptable to Mars. Additionally, because the method requires minimal shipping as it uses materials that can be sourced locally (dirt and waste plastic), it is also applicable as a technique for building affordable housing for poor communities such as the slums in Africa.

The reason we replaced a dome with a more conventional Earth-like 'house' shape is because a dome wastes a lot of space at the edges and it is also hard to redesign furniture to fit into a circular space as the angles of furniture don't fit well onto a curved surface. Also the sloping roof wastes space as you have to design furniture curved to match the edges and the slope. Even though a rectangular habitat is not very aerodynamic, Mars only has 0.6% of Earth's atmosphere, the strongest winds speeds went up to 60 miles per hour, but is you multiply that by 0.6, it would only feel like and have effects of only a 36 miles per hour wind so that wouldn't actually be a problem.

The design consists of a steel-aluminium alloy frame which may be shipped flat-packed, and then when opened and filled with a plastic-sand mixture, forms a cheap building block that may be used for construction. The only thing needed is a smelter to combine the plastic and sand and also a machine to make plastic polymers on Mars. On Earth, waste plastic and random dirt will be smelted and cheap metal frames will be bought and filled in. This will then be used as wall paneling to slot together. We built a model of a frame from cardboard and also designed a hab layout to illustrate the possibilities of the modular construction technique.

This has the potential to improve slum living conditions as they would be able to buy materials easily and build their own house designs. The metal frame and wall filling will both be very cheap and house building will be able to become even a DIY kit, making it easier for the poor, the needy and the disadvantaged. However, that is only one of the endless possiblilities and future innovations possible with this design...

""To build the Martian bridge to the future, we must have a blueprint to unite the architects, the suppliers and the bricklayers of the future. We are the architects but we need everyone. We all have the power to shape the world but we need to use it by building our future, our path, our destiny.

We know that we as the human race can expand our horizons onto Mars. Together with the support of all the innovators, futurists everyone who wants to build the bridge… Let’s join hands and together we can lift the Martian Dream into the Martian Plan and then...

We know that we can build this Martian Bridge of Colonisation to our future.

But the bridge of 1000 bricks starts with a single brick. Someday...Someday our bridge will be built.""