Inhabitants | Our Planet, Our Home

Inhabitants has received the following awards and nominations. Way to go!

The Challenge | Our Planet, Our Home

Compare NASA Earth science data with data about people and tell your own story of human-environment interactions!

[https://inhabitants.github.io/] Imagine that with some movements of your fingers on your smartphone you could plant a tree anywhere in the world and reforest the planet by playing a collaborative game, helping science and winning incredible prizes. 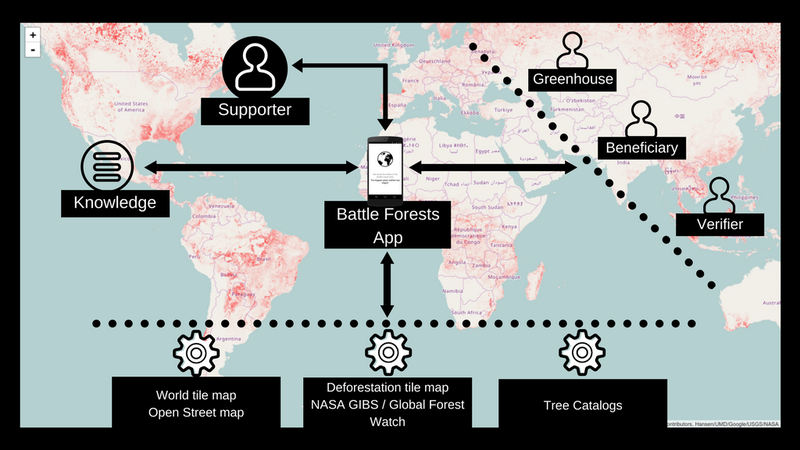 Our website: https://inhabitants.github.io/ (We are continuing to build the application).

Click Here to see in one image how the mobile app (The Battle Forests Game) works.

And Here you can access to the complete document description (with graphics and data).

The XXI century will be recognized in history as the period of humanity where we have created infinite amount of information. We have been able to measure the size of the Universe, and the structure of genes. We have created cures for thousands of illnesses, and we have invented the most destructive chemicals. We are capable of generating millions of scientific articles every year, uploading hundreds of papers every hour to mega databases, in a world where poverty has not been eradicated. We know more every second, every minute, and it is never enough. Surprisingly, and at the same time, mankind-developing model has brought us into a self-destructing stage.

Do we have enough information to change the destiny of the world? How can we deliver scientific information to ordinary people? How can we use the massive information that we process every day through Nasa’s Earth Observing System Data and Information System, and parallel data bases from international agencies and world wide research institutions? Can we unite people around the world in the war against climate change - deforestation? How can we write a sustainable story for the future?

According to the Food and Agriculture Organization of the United Nations, deforestation speed has been reduced in the 25-year period that was analyzed (1990 – 2015); nevertheless, the problem persists and has become more difficult to understand and tackle due to synergic interactions with other phenomena (green house gas emissions, temperature variations, among others).

We have to be conscious that most of the forests that have been lost last century have never been recovered. As an example, Ecuadorian continental forests have decreased form 14 630 847 ha in 1990 to 12 883 459 ha in 2014, a total loss of 11,94% of forest (Global Forest Resources Assessment 2015, National Report, Ecuador, 2014). Furthermore, the internal migration occurred in the 1940 and 1970 decades, generated pressure to the natural forest of the coast and the Amazonia. A total loss of 90% of the coastal forest and 30% of the forests from the Amazonia has been reported. More than 99% of the deforested territories of Ecuador were transformed into agricultural and urban sites (Sierra, R. 2013), therefore the accumulated loss of forest has a permanent effect. To change this reality, which is familiar for other countries around the world, it is not enough to reduce the speed of deforestation. It is mandatory to recuperate areas where forests use to develop, where forest use to live.

As we may appreciate in the maps, emerging countries have the highest changes of forest areas. Even though there are numerous factors that influence the loss of forests (demographic migrations & growth, agricultural practices, urban development, wood demand, etcetera), in a very general way, we can correlate the traditional development processes with the destruction and loss of natural areas such as forests. The urgent need of emerging countries to generate economical growth that will provide enough resources to reduce poverty and create better social conditions, and the low capacity to create goods and services that could provide financial resources to the system; pushed governments to fund their economies on the extraction of natural resources.

Recuperate and increase forested areas around the world by creating an app that integrates actors and process that will guarantee reforestation activities.

As part of our vision, we have analysed the Sustainable Development Goals (SDG) established by the United Nations General Assembly in the 2030 Development Agenda approved on September 25th 2015.

The necessity to bring up projects that tackle various SDGs at the same time, will give humanity a real opportunity to create a different development model. Eradicate poverty, increase our natural assets, bring social and economic benefits to every single human being around the world are the biggest challenges of our history.

Data (and other) Sources