FIT has received the following awards and nominations. Way to go!

The Challenge | Where's the Water?

Use satellite and other data to allow farmers, landowners, and land managers in your locale to identify and visualize water resources in their surroundings.

Cassandra is a real-time interactive disaster prediction engine with two user interfaces, one to be freely accessible to the public and another to provide schools with a hands-on, interactive teaching tool. 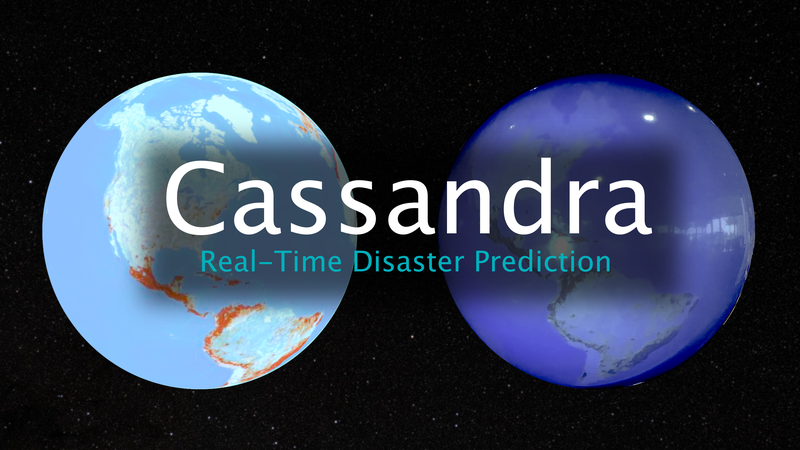 When developing Cassandra there were several goals that needed to be met in order to successfully implement the prediction engine and the user interface. Meeting all of these goals gives Cassandra the ability to save lives all over the world.

GOAL 1: To develop a system that makes the massive amount of data available from NASA and other public databases easily accessible and navigable by the general public.

GOAL 2: To apply algorithms that analyze and merge this data to predict real world natural disaster scenarios as well as estimate economic loss and the mortality rates that they could potentially cause.

GOAL 3: To display these predictions in a way that can be used to both educate the public and inform emergency personnel so they can deploy preventative measures in predicted disaster areas.

In order for Casandra to predict natural disasters, a lot of data is needed. This data comes primarily from NASA as well as several publicly available sources such as the US Geological Survey. All of this data is transformed into a common format that can be displayed in real-time on a common map through the web app as well as fed into our prediction engine. Currently our web app will display data from fires, floods, earthquakes and landslides.

Our prediction engine is the heart and soul of Cassandra. Without this engine, our user interfaces wouldn't be able to do anything more than an average weather app. The baseline prediction for near future events are polled from NOAA and the national Weather service forecasting data, and some modeling is performed to calculate periodicity in hazard events. Eventually, the goal is to apply models which correlate data from various sources to build a robust and efficient prediction engine.

To maximize the amount of impact our system has on society, we have developed an easy to use and widely accessible web app for the general public as well as an interactive teaching tool that is fun and informative for all ages. The web app can be accessed from anyone with a browser and an internet connection. To ensure that this interface is portable and does not require any special hardware to use we developed it to require the least amount of browser plugins possible. Currently the only software needed to run the web app is the free browser plugin WebGL. Our Twitter-bot (@CassProject) will also respond to tweets with data and projections.

The second user interface was designed specifically with a hands-on teaching approach in mind, but it can be used by anyone who wants the extra level of interaction. The teaching aspect of this system was very important to the team because we believe that the most effective way to save lives in a natural disaster situation is to prevent it from happening all together. We feel the best way to prevent these disasters is to educate the future on the different causes and factors of natural disasters.

In order to make this user interface hands on and intuitive for teaching we added a spherical projection system and a wireless touch screen that can take the place of the web interface. This provides the user with a tangible, three-dimensional representation of the Cassandra interface. By using the EVM DM6437 digital video processor from Texas Instruments we were able to manipulate Cassandra's output in real time, correcting the image distortions caused by projecting onto a spherical surface.

Eliminate the need for the WebGL browser plugin

Microsoft Kinect integration to make the sphere a touch surface

Port Cassandra to an immersive VR experience on the HoloLens