JUNO Radio | And YOU can Help Fight Fires!

JUNO Radio has received the following awards and nominations. Way to go!

Juno Radio helps NASA to deliver fires alerts in Near Real-Time (NRT) to the most remote locations on Earth that have no access to internet. The good old radio is back! 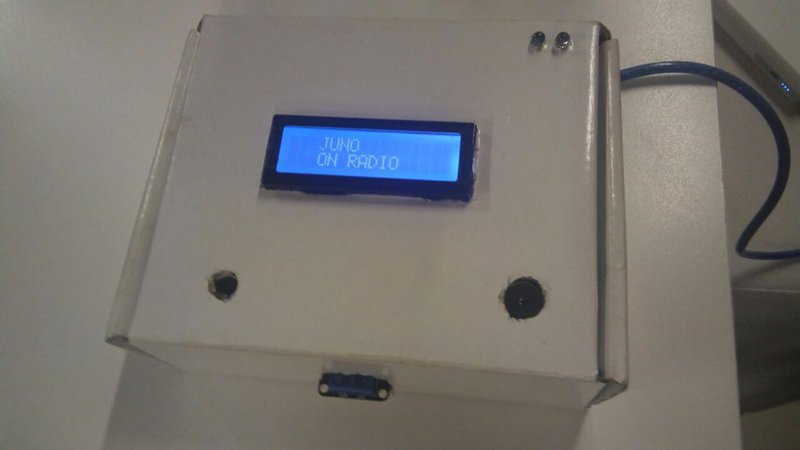 We accepted the challenge!

Our team is passionate about saving our forest from fire outbreaks. We have picked the challenge "And YOU can Help Fight Fires!" that asked us to build a fire-monitoring and crowdsourcing tool that will allow local fire managers to respond to wildfires. https://2017.spaceappschallenge.org/challenges/war...

Based on the FIRMS , that distributes Near Real-Time (NRT) active fire data within 3 hours of satellite overpass from both MODIS and VIIRS Algorithm 375 m Active Fire, we have been able to aggregate and transmit the fire coordinates of a fire primary location to places that have no internet connection.

This was only possible since AM radio stations have a large reach, and by law (in Brazil: LEI Nº 4.117) are obligated to transmit emergency alerts to their audience.

To make sure this technology is available to a lot of people, both software and hardware are open source (https://github.com/orgs/JunoRadio) and we made sure to use cheap eletronic components to make the hardware also accessible to every fight fighter, everywhere.

Bellow you can find more technical information about the Juno Radio:

We have build an API that aggregate the content of the FIRMS API email alert system and converts the files .csv send by email as attachment to voice files. We then transmit these .mp3 files to AM radio stations that are closed to the fire locations.

Fire rescue teams that are in remote areas need to have then access to a JUNO Radio, a hardware to get NRT data from the NASA satellites whenever there is a fire start in the region he previously delimited as his area of interested.

When the JUNO Radio receives the coded audio message transmitted by the radio stations, the arduino like microcontroller STM 32 process the information, decodes it, starts the sound and visual sensors to alert the firefighter and display the concordances from the fire starts location on screen. Whenever needed, the user can also configure the siren to amplify the alert depending on his location needs. (https://github.com/MarxSteel/JunoRadio/)

Our Juno Team: Ninjas WAAS that are making history

Our team is form by two teenagers, Mateus (14) and Raul(14), from a underprivileged community called Vila Verde, CIC located in Cutitiba, Brazil. They are part of a social project called We Are All Smart (WAAS), that empowers the youth in marginalized communities in Brazil to use technology (hardware and software) to solve their school and problems, and together with other 8 teenegers competed in the NASA Space Apps Challage this year in our city. Participants of the project WAAS are call Ninjas since they are always on the look for new abilities and tools to improve themselves and others around them.

Mateus was key to the development of the hardware, and together with Marx, developed most of the JUNO Radio. While Raul helped with designing and coding our API with Daniel.

This teenagers made history as the first ones in their community to win a hackathon and are now becoming an inspiration to their community and getting recognized for their efforts. In a country where every kids dream is to become a soccer player, this is a huge influence on their perspective and new possibilities.

During the weekend our team talked with Boticario Foundation, a corporate philanthropy institution that has two Protected Areas in Brazil, reserve manager and firefighters. The Reserves are located in the Atlantic Forest and in the Cerrado, the most threatened biomes in Brazil which present high figures of endemic species, that is, species that occur only in those areas. Scientific research is conducted in the Reserves aiming at broadening knowledge on the biodiversity of these environments and biomes. Together, they comprise over 11,000 hectares of protected natural areas, with several endangered fauna and flora species. In 2012, 95% of their 9.000 hectares Cerrado forest burn down, and today the way they find a primary fire in these locations in by site viewing of smoke and smell. No cellphone or internet is available in these location, therefore even tho they have 4 professionals train to combat fire, sometimes they take to long to find these fire spots, increasing the chances of a fire outbreak. We are signing this week a partnership for them to be the 1st to test out tecnology on the field.

We are also in conversations with local firefighters in Bahia state and have a warm connection to meet Lieutenant Kaneko and Major Prates, who are responsible to train the Civilian Defenses at Parana state that have shown interested on the solution to solve some of their issues on spotting primary fires.

Our team know that the work has just started and we identify these as our next steps:

- Run a pilot program with Boticario Foundation at Serra do Tombador Reserve, 9.000 hectares Cerrado forest, that has its fire season from may to november.

- Find a data base of rescue teams and firefighters of Parana State that monitor isolated and remote forests.

We will be using a tool to monitor the progress and impact of the project on the short and long term, follow us and keep it posted at www.peacelabs.co/p/juno-radio