Absolutely Scientifics | You are my Sunshine

Our idea is to help people understand how solar energy works and how much energy is produced per panel. Also we've developed a tool to help people plan their solar panel and battery need. 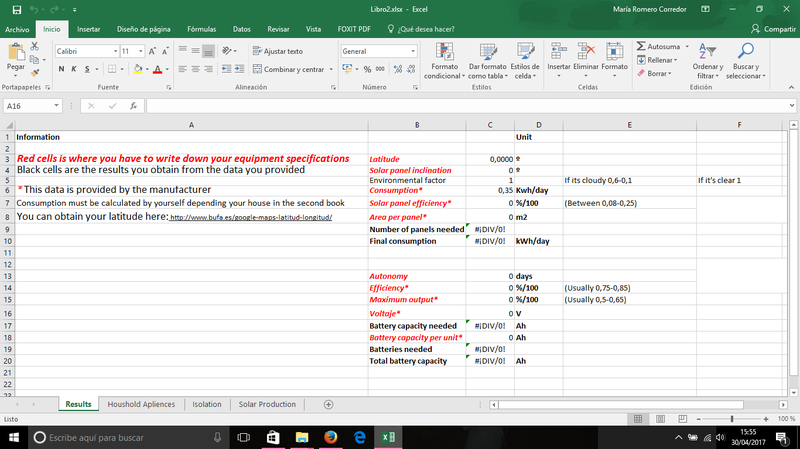 So hi, we are absolutely scientific and we are going to explain to you on which consisted our challenge, that is callled "You're my sunshine" and the way we tried to work it out.
So this challenge consisited in finding some app or tool that allowed us to accomplish three main aims:
1) Explaining to new users how solar panels work, the different types existing and the limitant factors found, so they could really understand its upsides and disadvantages.
2) Making people aware of daily consumption by giving the example of the NASA project taking place in hawaii,called HI-Sea that wants to recreate the life in Mars.
3) Developing some tool that allows people to know how much energy is produced by their installation.
The very first problem we had to tackle was the fact that we don't know how to create any kind of software or app. Thus, we decided to develope some kind of blog in which we gathered all the different tools that target each aim. In the end, we were able to develope an html page which included all our progress, and is considered as our solution to the challlenge.
So basically our page contains a lot of stuff. The first thing found is an introduction presentation for new possible costumers that includes a proper definition of solar panels, some information about the different types existing, and the way they work. In addition there are some limitant factors mentioned that users need to bear in mind. By searching information for this tool, we understood deeply the answers to all the questions that we had about solar panels. This way, we could make ourselves clear when explaining and when trying to work out the rest of aims.
Secondly, there is also this little program that we've created and it's really useful for non expert costumers. It consists on an excell page with several functions, and one of them (that is based on a formula found by Halley in the XVIII century) allows them to calculate the number of panels and batteries needed in a system only with the data that the manufacturer provided.
In order to calculate this, another data needed is the latitude.Thus the program calculates the isolation in the area and the solar production depending on the solar panel model, with other words, the energy produced, measured in Kw*h/m^2.That's in the first book of the excel page, and one of its function.
In the second book, there is another function, that achieves the third aim. There is a table with many household apliances, where the power of each household apliance and the hours of use per day must be written, so the program will give the total consumption.
Automatically it will write in the first book your consumption. Also we've added a environmental factor that goes from 0.1 to 1. / 0.1 means a really cloudy day, and 1 means that the sky is totally clear.
This factor is neccesary to calculate which household apliancies must be turn down in order to have a superavit in solar production , which allows users to make sure that they have energy enough prouduced even if there are some unexpected waste. All this will apear in first and second book.
The other books found are the formulas that allow to calculate everything, so the first and second books are a simplification of all the process so everybody can use it. In the third book we can find the isolation calculations,in which latitude, the date and the inclination of the solar panel have an influence.
In order to make easier to understand the influence that this has on the radiation received, our teacher helped us to develope a web in which by choosing a place in a worldmap and a date and an inclination angle, the radiation received could be shown by a point that growed in size. This is a very visual method that allows us to make people understand how important are this factors to calculate and have a near idea of their daily production.
Besides, we filled the different excel tables by putting the example of the NASA experiment from Hawaii, that wants to recreate an habitat in Mars, so this also can be useful for the people working there so that they can both calculate their energy demand and production. By putting this example we had a practical point of view of all the theorical calculations that we were developing.