MINERA TEAM has received the following awards and nominations. Way to go!

The MINERA HAB is designed on a small area to simulate life on Mars, protected against external & internal hazards, supplied with different recourses, allows privacy and socialization to improve the crew quality of life. 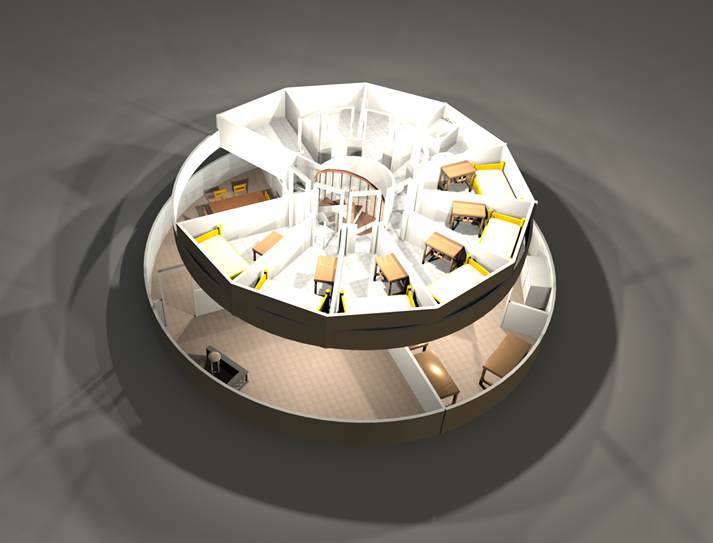 We chose the dome shape of the HI-SEAS which provide more stability rather than compared to other designs such as the cylindrical design of the MDRS (The Mars Desert Research Station) campus. The area we used is 1200 Ft2.

The hab is divided into four main quarters; this design will allow the separation of the hab which will facilitate the transportation in the future planes. It's also divided into 2 storeys for maximum use of space.

We should have a layer of protection to protect the hab in emergency case; so, we use a second layer at the second side of the solar cells system to do that job. However, in any emergency case; we choose from the control room to turn the outside layer to the protection layer in order to get the protection layer to oppose the lava. So, we can make that layer by using composite materials or any other alloys that has a resistance to electrical conduction & has a very high temperature or has a melting point very higher than the temperature of the lava.This external layer formed of solar panels that can rotate so the two surfaces alter and the protective layer become superficial to the solarpanels for its protection. 1. Energy: 2.The Air Components:


The body has to consume certain materials like oxygen, water, food, and we turn that into waste. So we breathe oxygen in and we breathe out carbon dioxide, which we're going to have to do something with.

The used instruments are used to generate energy. Also Functional fitness is assessed using “gym” exercises to evaluate strength, endurance, flexibility, agility and balance before and after flight. Strength and conditioning of hab crew is also monitored in association with crew exercise protocols.

The lab has a single door and the room can be isolated in case of emergencies. It's kept away from the water and food storage areas.

In the Kitchen, we added multi-use furniture such as the dining table which will be used for eating and as a billiard table.Virtual reality so they can see their friend and family and feel close to them as well as for entertainment, and a projector which will show sceneries from earth, such as morning and night in the ceiling of the open space in the socializing area, similar to the Planetarium Science Center in Library of Alexandria in Egypt. There is also internet connection for communication with a robust system of high-latency communication that imposes a Mars-like 20-minute delay on message reception each way.

There are 6 separate bedrooms each with a multi-use bed which can be folded to allow a small table to show for work, and has small cupboard to put their clothes in. There is also a small with sufficient free space for movement.

There are two bathrooms, the first in the first floor which contains a shower, the other one is in the second floor, it's smaller and doesn’t contain a shower. There will be waterless composing toilets that run on electricity.

This room will contain all the hardware and equipment responsible for connection with earth, modulation of temperature, the sensors, the energy batteries and fire-fighting system.

In the future, we will simulate the gravity on Mars in the hab to assess the capability of the astronauts to adapt to it.

This room will simulate the airlock in the ISS.

In a nutshell, the MINERA HAB is designed on a small area, protected against external & internal hazards, supplied with different resources, allows privacy, socialization, and communication with families and friends on earth, and most importantly, it aims to maintain a healthy physical & psychological state of the crew.

This will improve the quality of life of the astronauts, which will reflex on their physical and psychological state, allowing them to work better. It's also designed so as to collect data on the crew conditions, giving better result. In addition, it can be used on Earth as a safe settlement for people living in extreme environments and limited resources.